“I forget who all was with us on that tour (to Canada), I never really bothered about the other artists, cuz I was too busy doing something probably something I wasn’t supposed to be doing. But I enjoyed the tours with Johnny Horton, made quite a few of them.

Then I played a date in San Antonio, Texas, somewhere back then, I remember Faron Young, Don Gibson, and there was a boy named Roy Orbison, if ever a man can sing it was Roy Orbison. And I enjoyed being at the show with Roy.”

“I was in Nashville for some reason (1964) and George Jones was doing a lot of my songs right then in his albums. George had a tour coming up and he wanted me to go with him for some reason, so shoot, I just hopped on the bus and went right along with him. Went up into Illinois, and Ohio, snow on the ground and I believe he and Dale Reeves were on the show and some more groups, at this one place. END_OF_DOCUMENT_TOKEN_TO_BE_REPLACED

Johnny was long time friends with Country comedian and entertainer, Jerry Clower. Jerry was always good for a one-liner, funny analogy or comment. Johnny married Jeannie McLain in 1968 and after the marriage, when Jerry would see Johnny together with Jeannie he would say, “that’s like a buffalo nickel married to a silver dollar!” 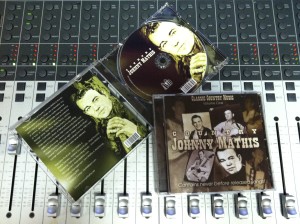 This week launched the digital release of Classic Country Music, Vol. 1 by Country Johnny Mathis. It’s now available on iTunes with a CD offering to follow soon! This release contains songs from the 1960′s never before released!