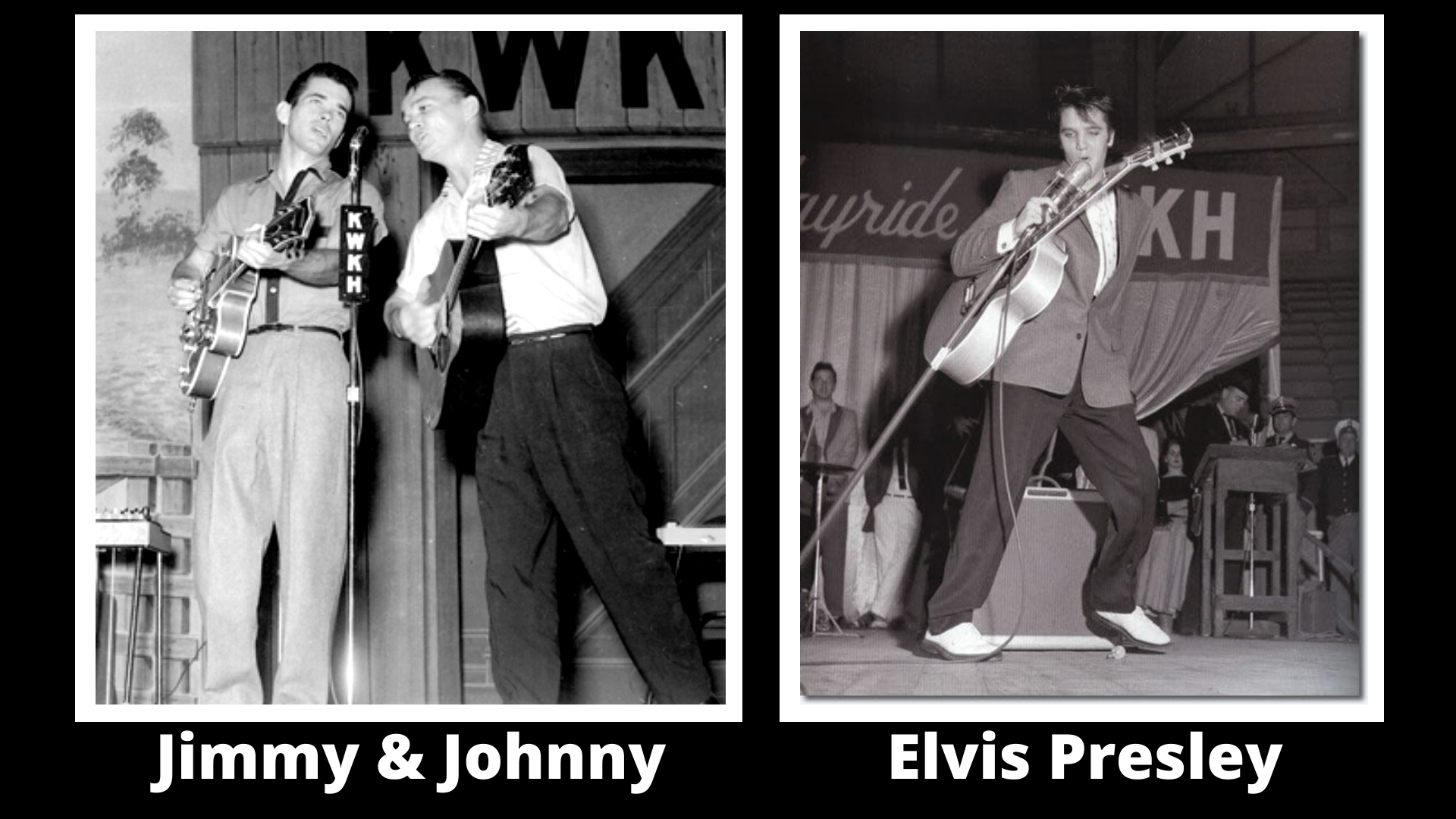 During the years of 1954 and 1955 the paths of Elvis Presley and Jimmy & Johnny (Jimmy Lee Fautheree and Country Johnny Mathis) would cross quite often … on the juke box, on the radio, on the charts, in a Billboard nomination and on the stage from the Louisiana Hayride to a multi-state tour.

Sun Records had released “That’s All Right” by Elvis in July of 1954 and the hit single garnered the attention of the Louisiana Hayride which had brought Elvis to join the cast of the Hayride in October 1954. It was a cast that included Jimmy & Johnny, Slim Whitman, Johnny Horton, Billy Walker, Jim Reeves and many others.

Elvis also secured a new manager in local Memphis DJ, Bob Neal, shortly after joining the cast of the Hayride while Jimmy & Johnny were managed by Tilman Franks. This would lead to Bob and Tilman to work together on booking the acts for tours from late 1954 and 1955.

Jimmy & Johnny were a popular act on the Louisiana Hayride and by the fall of 1954 they were enjoying the success of their Top 5 hit song, “If You Don’t, Somebody Else Will”. While Elvis Presley’s release of “Blue Moon of Kentucky” was also populating Billboard charts during this same time period. The songs battled back and forth a few times for the top spot in regional markets.

The chart success and radio success in 1954 for Elvis Presley and Jimmy & Johnny would lead to both artists receiving their first nominations from Billboard Magazine. The disk jockeys cast their votes for the Top 10 nominees for ‘Most Promising Hillbilly or Country and Western Artists’ for 1954 with Tommy Collins coming in at Number One. Jimmy & Johnny landing at Number 3 on the list, Elvis at Number 8. An impressive acknowledgment for Elvis considering his first single was released in July of that year.

1955 Jimmy & Johnny would make multiple appearances with Elvis Presley in cities from west Texas to Tennessee with the artists typically being back on Saturday night to perform on the Hayride.

Country Johnny Mathis shared a lot of stories from his days on the Hayride, touring with all the artist, including Elvis. Those were formative years in the music business. Johnny shared on occasion that one of the biggest goals for a performing artist during those times was to receive an encore at the end of their set, many times artists would pull out all the stops to see who would get the most encores by the end of the night.

It also wasn’t necessarily that lucrative for artists in those days either, Johnny told the story one time of how he and Jimmy, along with Elvis and his band, played an impromptu local date just so the artists could pay their hotel bill.

Here is one of those stories Johnny shared with Ralph Emery in an interview on the Nashville Now TV show in 1992 of “how he almost ruined Elvis’ career”.