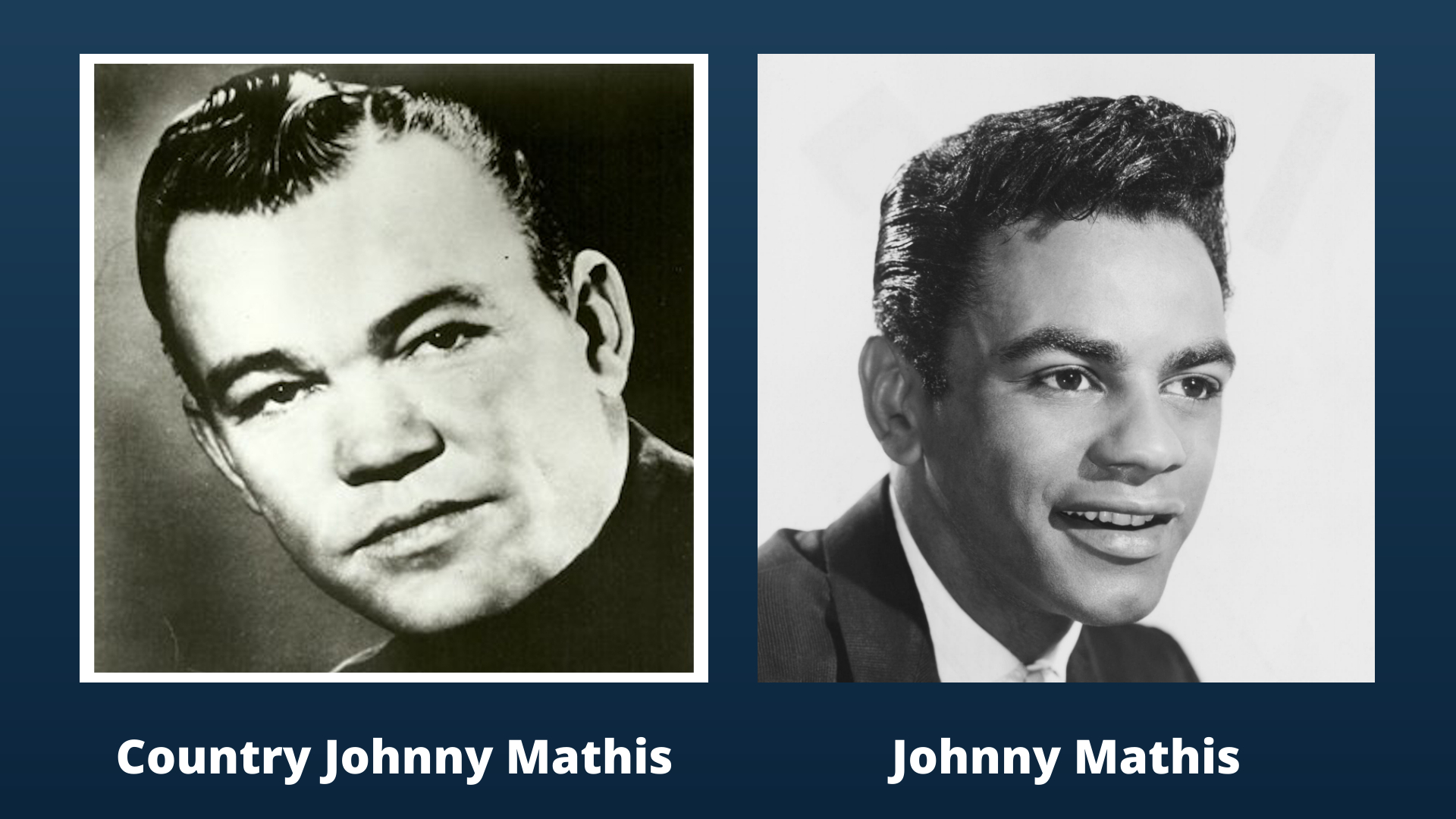 There have been two Johnny Mathis’ in music since the 1950’s, they had some things in common early on. Then one would eventually become known as a pop icon and the other became a prolific songwriter in Country Music.

The paths of the two Johnny Mathis’ did not cross in person but they both shared a lot of similarities in life and career.

Country Johnny Mathis would record his first solo recording in 1948 and one of his first notable cuts was by Faron Young in 1951 (“You’re Just Imagination). By the early 50’s, he was a regular performer on the Louisiana Hayride in Shreveport, Louisiana.

By 1954, Country Johnny Mathis teamed up with Jimmy Lee Fautheree to record “If You Don’t Somebody Else Will” (Chess Records). This would be Johnny’s first chart debut as an artist as the single went Top 5, peaking at #3 on the Billboard Country and Western chart, leading to the duo’s 1954 nomination by disc jockeys for ‘Most Promising Country and Western Artist’ (other artists nominated that year included Faron Young and Elvis Presley.) That chart hit, along with Elvis Presley’s first hit (“That’s All Right Mama”) had the two acts touring together in 1955.

Johnny Mathis landed his first charting single in 1957 with “Wonderful, Wonderful”, which became a Top 20 song going to #7 on the Billboard Hot 100, #23 on the R&B chart and #2 on Easy Listening. This would start a string of pop chart hits as an artist for Johnny Mathis.

From here the career paths of the two entertainers would take their respective turns. Country Johnny Mathis would enjoy another chart song or two as an artist but he became known as a prolific songwriter in Country Music with songs eventually recorded by 12 Country Music Hall of Fame Inductees and receiving two BMI Citations of Achievement. (George Jones alone recorded over 20 of his songs.) Johnny’s classic country recordings are still being used in film, TV and commercials today.

Johnny Mathis would go on to popularity as a pop artist icon with a string major hits such as “Chances Are” #1 in 1957 and “Too Much, Too Little, Too Late” (#1 in 1978) along with Christmas recordings that remain popular to this day during the Christmas season. (One interesting note of difference between the two Mathis’, Country Johnny Mathis never recorded or wrote a Christmas song.)

When did the moniker of “Country” come about for Country Johnny Mathis? Shortly after the pop Johnny Mathis had a hit single in 1957. Johnny added “Country” in front of his artist name to avoid confusion in the future between the two singers.

The two artists continued on their career paths in the 50’s and beyond, one becoming a prolific songwriter in Country Music and the other becoming an icon in Pop Music.

Listen to Johnny Mathis on Spotify.