Here is a 1976 interview with Tillman Franks that appeared in the British magazine ‘Country Music People’. Here’s a partial transcription of the interview on how Elvis came to the Louisiana Hayride, by Tillman Franks:

“Jimmy and Johnny had a song called “If You Don’t Somebody Else Will”. It was Jimmy Lee and Country Johnny Mathis, and they were tremendous entertainers. They were the only one, and as a matter of fact I was booking (them) at the time and I had got them on Chess Records.

I wanted to get Jimmy and Johnny, I had them booked for a Saturday night and I asked Horace Logan if he’d let them off the Hayride, and they said “no”, they couldn’t. So I said well, I heard a record on the radio, and I’d just found out the boy wasn’t coloured, he was a white boy and he had a song called “Blue Moon of Kentucky” and “That’s Alright Mama”, and I asked Stan Lewis, and he said that he wasn’t black, he was white and lived in Memphis.

So guess what I did? I called up Sam Phillips, (Sam’s told this story many times, they never had it published, nobody had put it out, that’s a true fact), I called Sam Phillips and told him to have Elvis call me, and Elvis called me on the phone, and I told him I would get Horace Logan to get $125.00 to bring his two players out, Scottie and Bill.

He said, do you mean I could make $125.00 for one night? Elvis knew me way back, I was the only one down there he knew, so Sam brought him down and we started a deal.

So the first appearance Elvis went on, he didn’t get a hand, he started shaking and he was stiff out there, and they told him not to do any vulgar movements, and he just didn’t feel at ease. So he came off the stage, and he asked me about it.

Now, I wasn’t a manager of the Hayride, I was just there, you know, with Jimmy and Johnny. Horace Logan was the head and Pappy Curbiton at the time was the artiste bureau director, and so I told Elvis, you just jump any way you want to, and Elvis thought I had something to do with the show, and he asked me if I thought it was alright, and I said do anything you want to.

He hit the stage, the second time, and the roof came in.

Then Elvis stayed in town two weeks looking for me to be his manager, but was so ashamed of myself, I didn’t have a job. Jimmy Davis brought groceries to my house, and I love him to this day on account of it. That’s a true story. ” – Tillman Franks (Country Music People Magazine – 1976)

Here is the original interview in its entirety from the magazine, Country Music People 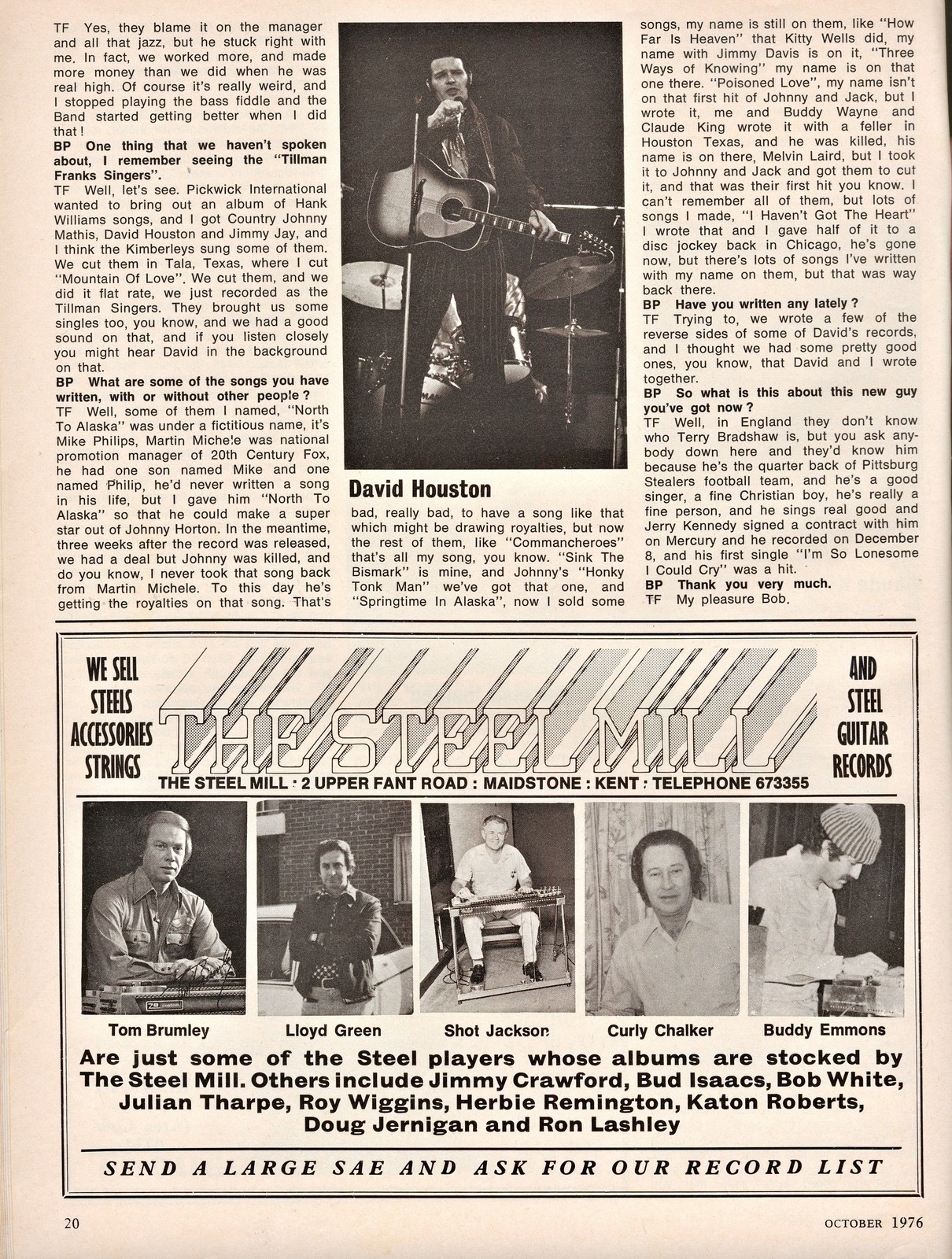